Can the English language go too far?

Working in the translation industry definitely goes hand in hand with a sense of pride in my knowledge of the English language – the Birmingham branch of The Translation People often turns into something of a debate room when one of our German team asks for advice on a particular word or phrase, and the English team battle it out to see who can prove they have the best knowledge of the English language (dare I say it, I’ve been proven wrong on occasions!) Consequentially, I find myself fascinated by any kind of discussion of this weird and wonderful language.

The BBC recently reported on “The rise of inflated job titles” (see link to article below). The article discusses the growing trend of some groups of professional people in today’s society feeling the need to protect their job titles, for example the Royal College of Surgeons. According to the article, some surgeons believe that the status of their job title is under threat from other groups of “surgeons”, such as tree surgeons or plastic surgeons.

The article moves on to discuss other examples of “inflated” job titles, in which elaborate wording is used for a job title, instead of using the plain and simple terms which describe what a person actually does. The BBC asked readers to write in with their examples of such “inflated” job titles, and the response makes for great reading! Among the best examples are “director of first impressions” for “receptionist”, “environmental maintenance officer” for “binman” and, my favourite, “transparent-wall maintenance engineer” for “window cleaner”. 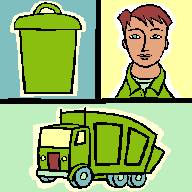 These all seem like great examples of when the English language goes too far, and it’s hard to imagine the advantages of using such inflated job titles, yet easy to suggest the disadvantages: people won’t understand what you do, people might take you less seriously, and your business cards will cost more to print! In the case of some examples, it seems as though the aim is to simply make the job title seem better. Well, my Uncle is a binman and I have no qualms telling people that, and neither does he!