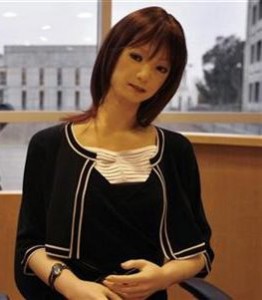 Hala is a ‘roboreceptionist’ that is being developed in a joint venture supported by two US universities. Hala is her name and helping people is her game claims the promotional video and not only is she bilingual, she is also programmed to be bicultural.

Hala is being developed by Sandiway Fong, an expert in computational linguistics. It is hoped that multicultural societies will be able to benefit from this type of language service, but it is certainly a hefty undertaking – as anybody who has used automatic machine translators or interpreters and eschewed the all-important human element will testify! However, in Qatar, there is already a version of Hala in operation using both English and Arabic languages.

Hala’s intended purpose is for use in ‘computer help-agents, multicultural information kiosks, tour guides and automated international call centres’ and is resplendent in a range of facial expressions. The monitor is even programmed to move like a person’s head when speaking!

Technically, a natural language interface is used that is dependent upon user input to improve linguistically. It is being designed to recognize the use of slang, different accents, to eliminate background noise and to identify when foreign language speakers step up to the mike. For the latter aspect, Fong uses the example of a native Arabic speaker who may want to interact with the computer using the English language. Hala will be able to detect this linguistic and cultural switch and in a bid to avoid misunderstanding, idiomatic expressions will be recognized so that any speech will not be taken literally. Hala is being fed audio resources rather than textual sources as the main focus is on audio output and input rather than the written word.

To add the human touch and to avoid any cultural faux pas, Hala will also have knowledge of typical greetings depending on the user’s language, and shall also take into account local customs. Currently a database is being compiled to ‘train the robot’.

At the moment, Hala operates bilingually in Arabic and English, but if she proves a success, then front of house may never be the same again!