Brexit has caused a major shake-up for businesses that had been planning to expand into Europe.

The uncertain nature of what the future holds for the UK’s relationship with countries like France, Germany and Spain has seen fewer companies seek a new footprint within EU territory and instead, they are looking further afield.

In fact, our in-house data suggests that British businesses are instead favouring areas across Africa and Eastern Europe to either set up new operations or begin selling to overseas customers. There has been so much activity in these regions across the world that business materials are being translated into languages such as Zulu, Afrikaans, Serbian and Macedonian at least 2,000 per cent more than three years ago.

Specifically, translations into Macedonian, Afrikaans, Zulu and Serbian have the highest reported increases in the last three years but here’s the 10 fastest growing business languages between 2016 and 2019: 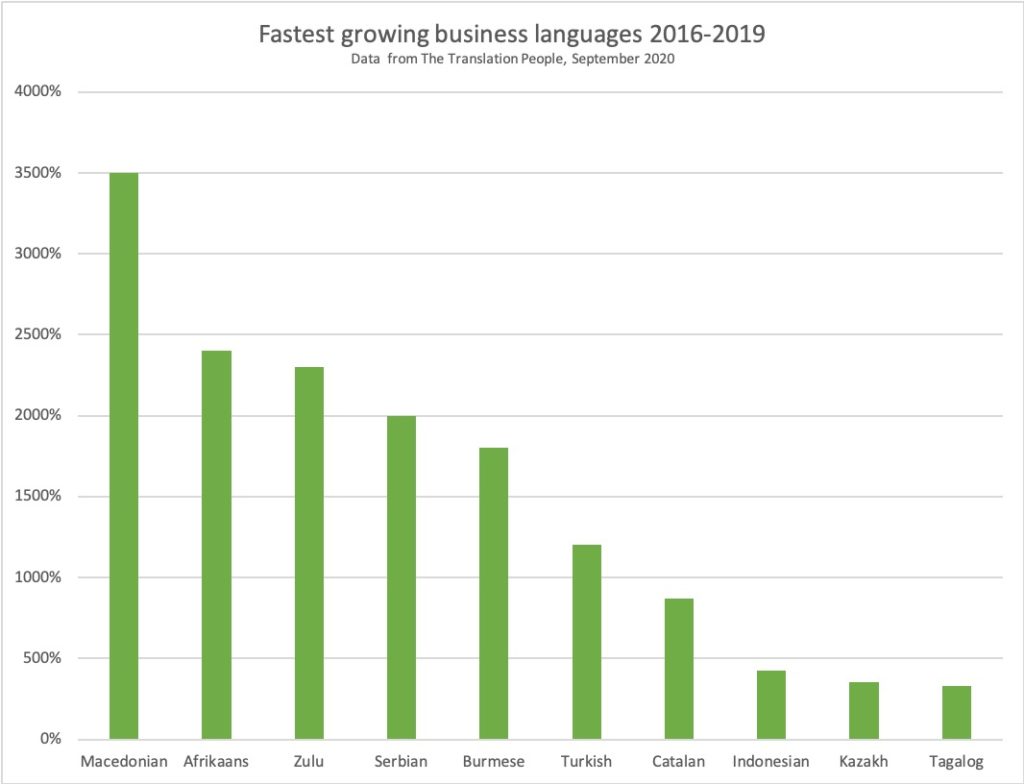 To help us decipher why these trends might’ve occurred, we spoke to Andy Cristin, finance director at Pareto Financial Direction Ltd. He’s been supporting UK business to expand overseas since the 1990s.

Andy said: “It’s interesting to note these emerging trends in language translation, particularly that there is an increase in translation of UK business material into African languages.

“African and South-Eastern European countries are logical bases for physical supply chain partnerships. They have cheaper labour costs compared to the EU and for the South-Eastern European countries, shorter transport routes than India or China. The workforces are educated, skilled and multi-lingual and the time differences allow for better communications than with the Far East, putting them on a more level playing field with UK employees.

“Overseas expansion to these areas is particularly suited to medium-sized businesses from more traditional industries – manufacturing, automotive and professional services, for example – rather than those with specialist or highly technical operations. For these types of businesses, the sourcing of relevant expertise can work out much more expensive and instead become a drain on a business, rather than an opportunity.

“We expect to see more UK businesses expanding to these areas, too, as the years go by. Brexit is driving businesses to insure themselves with a second source of supply outside of EU territory; those who do so successfully won’t see any need to migrate back to Europe even when trade deals are established, and it will encourage more businesses to consider alternative options to those offered by our closest neighbours.”

In comparison to the growth figures, translations into other popular languages are decreasing.
The fastest decreases in translation occurred in the following languages: 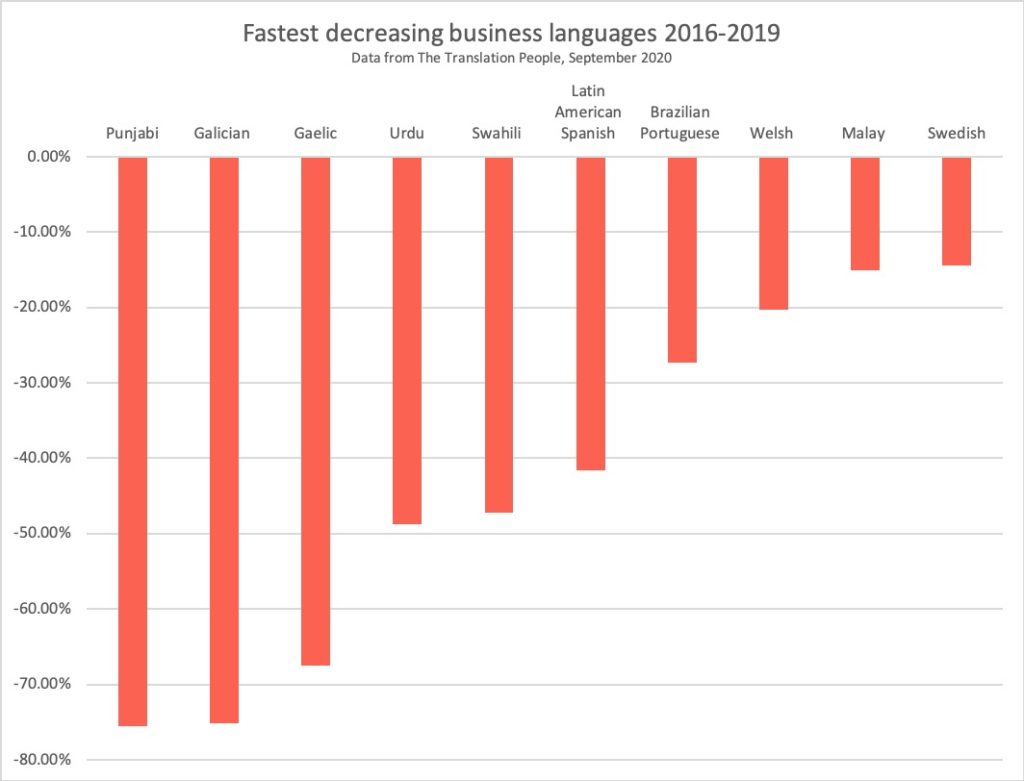 Translations to French (+17%), Italian (+1.9%) and German (+1.8%) have experienced minimal growth but still see huge amounts of words translated each year. In fact, the data shows that our most frequently requested languages are those below, with the high volume of words indicated showing that they are still the highest priority for most UK businesses:

Language trends such as those identified in our data are indicative of the ways in which UK businesses are changing. Any business targeting a new territory should ensure they are equipped from a linguistic and cultural perspective because whether you plan to have a workforce overseas or sell to customers there, individuals will more readily buy from and work with you if you’re using material which is fully localised – such as websites, social media, video training and user manuals. Even in countries where employees and workers are more confident in English, for efficiency, accuracy and inclusivity, it’s always beneficial to have materials translated into the native languages the teams speak.

We can translate B2B materials into over 300 languages, so are well positioned to help businesses launch their brands or operations into any country of the world. We’ve supported businesses in sectors as diverse as logistics, car rental services, manufacturing and online learning to do just that.

For example, we’ve worked with Hydronix, the world’s leading manufacturer of digital microwave moisture measurement sensors, since 2016 as it’s expanded across the globe. We’ve translated marketing materials, technical manuals and software for use with the interface of Hydronix equipment, into 24 different languages including one of the fastest growing – Turkish. Recently, Hydronix has diversified its business into controlling moisture in animal feed and grain processing, which has required the creation of brochures, technical documents, software, website content and adverts into the same 24 languages, with plans to add to this list.

For CHEP, which deals in pallet and container pooling services in industrial and retail supply chains around the world, we created a scalable solution which could see its quickly translate its website content into different languages as it expanded across the globe. In total, we’ve translated its web copy into 28 different languages – 27 of them bilingual and two of them trilingual. In addition, we have recently added Afrikaans and Zulu to the list of languages provided to CHEP – translating health and safety videos and other HR content for its base in South Africa – as well as Serbian for its European operations.

Meanwhile, we’ve supported GAMA Healthcare, a world-leading developer and manufacturer of infection control products, to expand its business across three different continents. The healthcare sector relies on safety-critical information which must be clear and accessible to all, whatever language they speak, so we’ve translated health and safety guides, export brochures, trade exhibition information and other marketing materials into 12 different languages including Serbian, Arabic and Russian, which has helped the company’s international sales increase by 42 per cent.

Our data and these business stories show that British companies are feeling more empowered to consider territories they may never have done before, which will continue to put the UK at the centre of global business. We’re here to support you as you expand, putting translation of your content at the centre of your success.