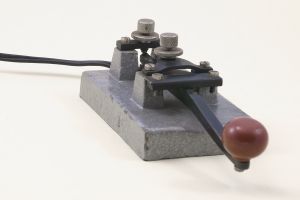 Morse code is currently celebrating its 175th Anniversary; messages were first transmitted using the code in September 1837. Interestingly the now very familiar knock-code was apparently not developed by its namesake, but rather by Alfred Lewis Vail.

The code, as Morse had invented it, worked at first like a seismograph: a pen, a piece of paper and a pendulum that Morse stole from an old clock. Without power, a line ran out from a straight line when current was flowing out of the pin and hit recorded spikes. From these spikes a number of combinations were determined, which could in turn be decrypted using a code index.

Machinist and Inventor Alfred Vail transformed the idea of the current flow into an electrical shock and Morse’s machine was equipped with a push button. This created the familiar knocking sound we know today. The various combinations of short and long signals (and breaks) are directly attributable to the alphabet.

The coded language can be sent via electricity or light. When ships are in need, they can fall back on transmission by light, provided that another ship is in sight.

We were interested to learn that are also different alphabets for Morse code. There is a separate allocation for Greek, Cyrillic, Hebrew, Arabic, Chinese, Japanese and Korean.