The Translation People opens office in Boston, US – and celebrates with a hug! 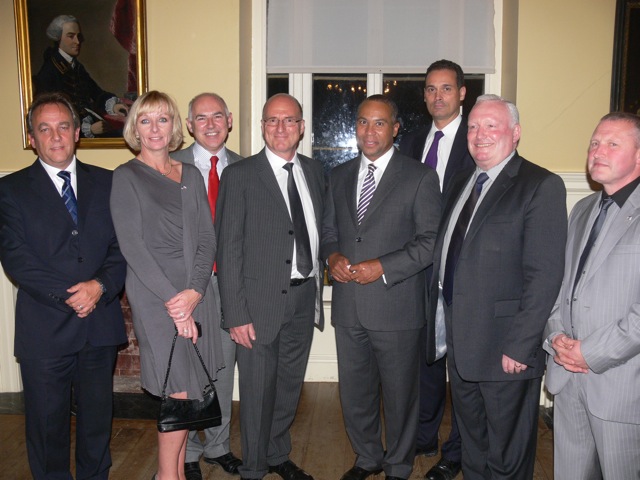 A bear-hug from the Governor of Massachusetts was the last thing businessman Steve Wilde expected when he announced his company was expanding into the US and opening a Boston office.

Governor Deval Patrick’s friendly, if unorthodox gesture, came as Steve, Managing Director of Manchester-based The Translation People, attended a formal function during a visit to the city to formalise the new business venture.

Steve said: “It was certainly a surprise, especially as it was at a reception in the historic State House in front of hundreds of guests. But it sums up what a warm reception the Bostonians gave us throughout the trip.”

It also demonstrates that businesses in Boston are eager to welcome investment from the UK and deal with North West firms.

“It’s only a week since we opened the Boston office and launched the dedicated website, but already we are receiving genuine enquiries,” said Steve.

The Translation People provides business-to-business translation, foreign language typesetting and interpreting services through a global network of linguists. Since its acquisition in 2007 and subsequent rebrand in 2008, the company has enjoyed year-on-year growth and now, as well as its headquarters in Manchester, it has offices in Glasgow, Birmingham, London, Bonn, Paris and now Boston, with clients in 32 countries worldwide.

Steve is already planning a return visit to Boston in a few weeks to follow up the contacts he has made.

“There is such synergy between Boston and the UK,” said Steve. “We decided to have a presence in the city after winning contracts with two new major US clients. We have a strong reputation in the UK and aim to build on that.”

During the trip, organised by Liverpool Chamber of Trade and Commerce, Steve met a number of small and medium size companies ready to expand their businesses globally but needing expert help in setting up and managing non-English language websites.

“We have a particular expertise in this area,” said Steve. “We have our own dedicated sites in German, French and Dutch and I believe there is an extensive pool of potential new clients for us in the Boston and New England area as well as the rest of the States.”