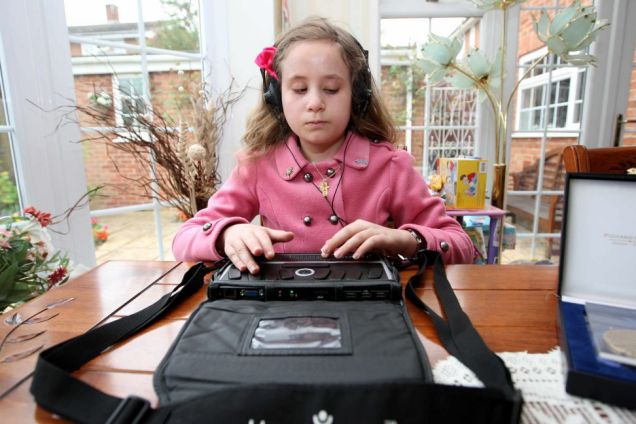 Alexia Sloane, a gifted linguist, fluent in English, French, Spanish, and Mandarin was given an opportunity to work as an interpreter at the European Parliament in Brussels this month.

‘The other interpreters were amazed at how well she did as the debate was quite complicated and many of the words were rather technical.’

What makes Alexia unique amongst interpreters is that she is only 10 years old, and is blind.

‘She was given a dispensation to get into the building, where there is usually a minimum age requirement of 14, and sat in a booth listening and interpreting,’ said Alexia’s mother.

Having an English father, and a half Spanish, half French mother, Alexia was trilingual from birth. At the age of two she lost her eyesight as a result of a brain tumour.

However, Alexia adapted quickly and was able to read and write Braille by the age of four. At the age of six she added Mandarin to her repertoire and decided she wanted to be an interpreter. Last year Alexia took her French and Spanish GCSEs (6 years ahead of her school year) and received an A*in each.

After winning the young achiever of the year award she asked to shadow the European Parliament’s head interpreter as her prize.

‘It was fantastic and I’m absolutely determined now to become an interpreter,’ said Alexia.