After the Aston University graduation ceremony in the Town Hall on Tuesday 30th March, Operations Manager Jasmin Schneider from the Birmingham office presented the 2010 Translation Prize for the most outstanding translation student to Antonia Wolfrum, who achieved a distinction on the “MA in Translation in a European Context” programme. As part of the prize, Antonia, who now works as an in-house translator in the Netherlands was also given the opportunity to take part in a translation project worth £200. Amongst the graduates was new Birmingham Account Manager Denise Sauer, who received her MA degree after successful completion of the same course.

The awarding of the Excellence in Translation prize to graduates is part of the corporation between the Aston University School of Languages and Social Sciences and The Translation People. The aim of this partnership is to raise awareness of the translation profession, in both the academic and business worlds, and to make the next generation of language students aware of the opportunities that lie in the translation industry. According to Jasmin Schneider, “Translation is a much misunderstood skill and we feel it’s important to raise the profile of the translation industry. Through this award we not only draw attention to the industry but also recognise where excellence in translation is being achieved at the same time.”

The Translation People congratulates all Aston University graduates and wishes them all the best for their professional futures! 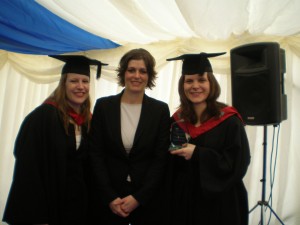