It’s not just a dog’s life!

Last month we saw how bowlingual is allowing human’s to communicate with man’s best friend, the dog. Today Google have gone one step further and have created an Android application –Translate for Animals. 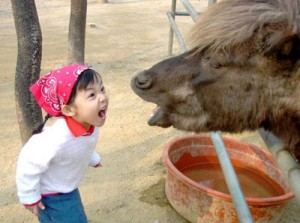 Had this little girl had the Android app she wouldn’t have had to shout.

So far the app, which will only be available on Android 1.6 handsets and above can translate noises made by cats, dogs, birds, rabbits, guinea pigs, hamsters, tortoise, horses, chickens, sheep, donkeys, and pigs. For the time being your furry friends’ thoughts can only be translated into English, but there are plans to allow translation into Cantonese and a few other language in the near future.

The app uses speech recognition and translation engines to analyse the acoustics produced by your animal and compares it with the existing sounds in their animal linguistics database. Google have issued a disclaimer, stating that they will not take any responsibility “if you are offended or disappointed by what your chosen animal may say.” And they “… do not guarantee stimulating conversation”. Looks like Doctor Dolittle may be out of a job though!